Calendula Ointment for Injuries and Wounds in Homeopathy

Uses of Homeopathic Sulphur Ointment - Dr.Devendra Kumar MD (Homeo) This articles also informs about the uses of Sulphur in other potencies like Sulphur 3x, Sulphur 6x, Sulphur 6c, Sulphur 12x, Sulphur 30c,Sulphur 30ch, Sulphur 200c, Sulphur 200ch and Sulphur 1m. Sulphur ointment is most useful Homeopathic Remedy. Writing about Homeopathic treatment without Sulphur Remedy or ointment is impossible. Sulphur is a great poly crest Homeopathic Remedy. It is useful is variety of skin complaints. Sulphur Ointment is most useful in ANY TYPE OF ERUPTION, which are moist, burning and itching.  Sulphur ointment is useful in Skin  ITCHING when intensified with HEAT during NIGHT IN BED. This ointment can be applied in skin complaints when WOOL touching aggravates the skin itching. Sulphur-ointment is specially helpful in cases where  BATHING COLD.water reduces the intensity of Itching. Dr.Boericke View on uses of Sulphur Ointment : Sulphur is great Hahnemannian anti-psoric. Its act
5 comments
Read more 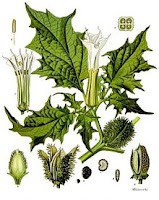 A Homeopathic Day Carried by Stramonium Storm Dr. Mirjana Zivanov Datura Stramonium It was New Moon of a cold, windy, November day. The first sleet of the autumn. The streets were bustling with activity. There was a noise coming from car horns honking in the busy traffic, adding to an overwhelming agitation that permeated the city. It felt as if there were no windows in the clinic, as if we were sitting on a busy street pavement. There was a loud buzz of roaring and thundering sounds of cars speeding by. Street dirt and fallen leaves, with an occasional plastic bag from a nearby dustbin, were flying round carried by gusts of whirling wind. There was some growing unease hanging in the air, with an ominous threatening feeling as if something bad was about to happen. It was dusk. Dark, purple clouds pregnant with snow were obscuring the sun that was falling behind a tall, concrete building. Dark shadows were growing and the world was painted over in coffee shades, like in a stri
5 comments
Read more

Homeopathic Remedies and Treatment for A.I.D.S.Acquired Immune Deficiency Syndrome -Article By Dr.Devendra Kumar MD (Homeo) Consult. AIDS is caused by HIV or Human Immuno Virus: Hello today I would like to present a topic on HIV AIDS. We have to know what is AIDS or HIV. It is nothing but acquired immune deficiency syndrome. Acquired means you got it infected from somewhere else. Immune deficiency means deficiency in your fighting mechanism, body's ability to fight with infections. Syndrome is a group of symptoms a group of problems that you have. HIV the term is meant for the virus. Which is the human immunodeficiency virus. Homeopathic remedies primarily acts on the immune mechanism of the person affected with immunodeficiency virus. Now we will know what happen if a person get HIV. Primary the HIV virus grow inside the lymphocytes. So that virus grow and reduce the quantity of lymphocytes. Primary the the lymphocytes reduction will lead into number of chronic diseas
2 comments
Location: Machilipatnam, Andhra Pradesh, India
Read more

Top 9 Homeopathic Remedies that Every body should have

Homeopathic Home Remedies that Everybody should have in day to day life: Homeopathy is second most enormous business on the planet. It has its benefits over the allopathic system. Not at all like allopathic prescriptions some homeopathic pharmaceuticals are backup in everyday life. Can be utilizable in most therapeutic conditions. They can be utilized preceding counseling Homeopathic medico. Unquestionably they incite no reactions. Homeopathic Remedies like Nux Vomica , Pulsatilla , lycopodium , phosphorus, carbo veg, Arsenic collection are particularly helpful in most health related problems. They ought to be utilized as a part of single measurement. In the event that so they can yield great result. Can cure most hazardous coming sicknesses even. Let us see some medical conditions in which these most useful Homeopathic Home Remedies are helpful. Nux Vomica: is the first most Homeo Remedy to be kept in our Homeopathic Medical Kit. Nux Vomica is useful in conditions like,
8 comments
Read more

Homeopathic Treatment for the complete cure of Gall stones:  - Dr.Sindhuja BHMS Gallbladder is a small organ situated in right side of abdomen under liver. The main function of gallbladder is concentration of bile. Now a days many people suffer from gall stones. This is mostly because of changing life styles. Medical term for gallstones is chole lithiasis. So many cases were referred to surgery but there may be a chance of recurrence. In these cases homoeopathy do’s well. It not only give relief from pain and inflammation caused by gallstones but also removes the tendency of stone formation by constitutional prescriptions. Gallstones are very common in females than males. Fasting, fatty rich diet, use of hormonal drugs play a role in formation of stones. In some cases it may be hereditary. Usually gall stones formation takes place in late 40s to 60s. patients complain of pain in right side of abdomen, nausea, vomiting, and rarely jaundice when there is obstruction. Fever may p
1 comment
Read more

- Dr.Devendra Kumar MD Homeo, Hypothyroidism is due to deficiency of production of Thyroid Hormone. There are many causes for the low production of Thyroid Hormone. Most common cause is Auto immune. Auto immune thyroid is also called Hashimato's Thyroiditis. The next most Common cause is Deficiency in Iodine intake. In these cases Thyroid gland will be enlarged in order to produce more thyroid hormones. It is also called Grave's disease. Homeopathic Natural Remedies are the best alternate treatment for the cure of Thyroid Problems permanently. I have seen most cases of Hypothyroidism under lying cause is the excess use of steroid medicines in allopathy. Those cases who underwent cesarean or major surgery are commonly prone for this auto immune hypothyroid problems. People who underwent surgery for the second time are most likely the victims of this Hypothyroidism. I would like to explain how Homeopathy can treat Hypothyroidism: Homeopathic treatment for Hypothyroi
25 comments
Read more
More posts

HomeoResearch is a Homeopathy Blog dedicated for Homeopathic Patients and Learners.

Visit My About Us Page